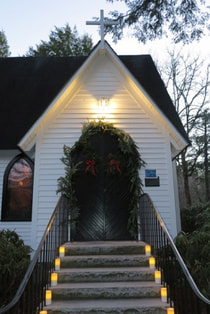 The Reverend John Archibald Deal was an early missionary and circuit riding priest of the Episcopal Church. He journeyed with his wife Cornelia and his son Waterman to the far western mountain town of Murphy, North Carolina in the year 1876.

It was in 1878 that Deal traveled on horseback over the rocky trails to Cashiers Valley. Here he found a small community of pioneers and several South Carolina families that summered in the cooler mountain climate. With the help of General Wade Hampton, his family and friends, Deal founded a mission – Church of the Good Shepherd. In August of that year, at the invitation of Hampton, the Bishop of the North Carolina Diocese, Thomas Atkinson, came to Cashiers.  During the summers that followed, Deal conducted Sunday services in the Hampton’s one-room schoolhouse. After the building burned, the Hampton’s and their friends contributed the funds needed to build a church. The cornerstone was laid on August 14, 1884, and construction completed two years later.

Behind the church a cemetery was created. The earliest burials were the four little daughters of Thomas and Bessie Grimshaw, who died of diphtheria, within eight days of each other in the fall of 1888. Their graves are surrounded by a black metal fence and a bronze plaque which describes some of the family history.

Disaster struck on the evening of Sunday, August 21, 1892, as fire destroyed the church. The congregation rallied to provide money for a new church, dedicated on September 2, 1895. This is the present Church of the Good Shepherd, the oldest church structure in Cashiers. It was placed on the National Register of Historic Buildings in 1986.

The bell tower was constructed in 1892. The one-half ton bell was manufactured in 1892 by McShane Bell Co. of Baltimore and shipped by sea to Savannah, by rail to Asheville and by wagon to Cashiers. The tower was replaced in 1952 and again in 2002.

For many decades, supported by the succeeding generations of the Hamptons and their friends, Good Shepherd thrived as a summer chapel. As numbers decreased, services ceased for a short time. Then, in the middle 1920’s, after needed repairs to the building, summer services resumed. In 1948, Henry Conkle was appointed Church Warden by Bishop M. George Henry. Conkle initiated a summer schedule of visiting clergy and built a small cottage as a Rectory to house them.

In 1979, Henry Conkle resigned after 31 years as Church Warden and a Bishop’s Committee was appointed. That year, in response to the increasing population in the Cashiers area, the first winter services were held. In 1982 The Reverend John Stephen Hines was called as a full-time Vicar and two years later became Rector when Good Shepherd was designated as a Parish.

To provide a larger Sacristy and Rector’s office, an annex was added to the church in 1985. Then a large Parish Hall was constructed and dedicated in May 1990, with needed space for the wide range of Good Shepherd activities. The adjacent small cottage (former Rectory) served as a Sunday School for the youngest children.

In 2002, a building program was initiated to add needed Christian Education space for both young people and adults, and to modernize the Rector’s office, administrative space and other support facilities. Bishop Robert Johnson dedicated the building on June 11, 2004.

Since 1986, an annual auction and bazaar is held in the summer, to provide funds to support academic, educational health, environmental, and charitable organizations in Jackson County. Funds are also used to fund a scholarship program to assist local graduates with college expenses.  All proceeds from this event are distributed to charities in our area.

In 1998, as summer attendance strained the capacity of the church, a Sunday Summer Chapel was started, in cooperation with the Church of the Incarnation in Highlands. It is located at the old White Schoolhouse on Whiteside Cove Road, a few miles west of Good Shepherd. This service is conducted by The Reverend Toby Summerour, and includes spirited Bluegrass Gospel music.

What began as a mission outpost beside a wagon road in Cashiers Valley has grown and prospered from the commitment of countless worshipers guided by the Holy Spirit. The simple, white frame church reflects the era of pioneers and early summer residents and continues today as a testament to our need to gather and worship and then go forth and serve in the name of Christ.
Parish Hall

Hines Hall, our parish hall, is a focal point for a myriad of activities of our Church community.  It was dedicated in 2003 and is named for our first fulltime rector, John Stephen Hines.  Today, the main floor houses our administrative offices, several classrooms, a kitchen, the great hall, library, choir room and two smaller meeting rooms (12 and 50 persons respectively.)  The great hall can accommodate 200-300 persons depending upon its intended configuration.  On peak religious observance days (Christmas, Easter) Hines Hall often acts as an overflow for worship service congregations.  It is also used for our annual meeting, multiple weekly meeting events such as AA or DOK, our auction night, parish meal gatherings and all sorts of special events.  The lower floor houses our bazaar and auction headquarters on a continuous basis.
Our People

The Good Shepherd family is 250 families strong and a unique congregation.  Many are retired, bringing a wide spectrum of liturgical traditions and customs.  We are educated, express our opinions readily, are very friendly and caring, and bring energy and commitment to the programs of the church.  From May through October, our congregation grows when summer residents and visitors return to the area.  They have a deep loyalty to Good Shepherd and have supported the church generously for years with their time, talents and finances.